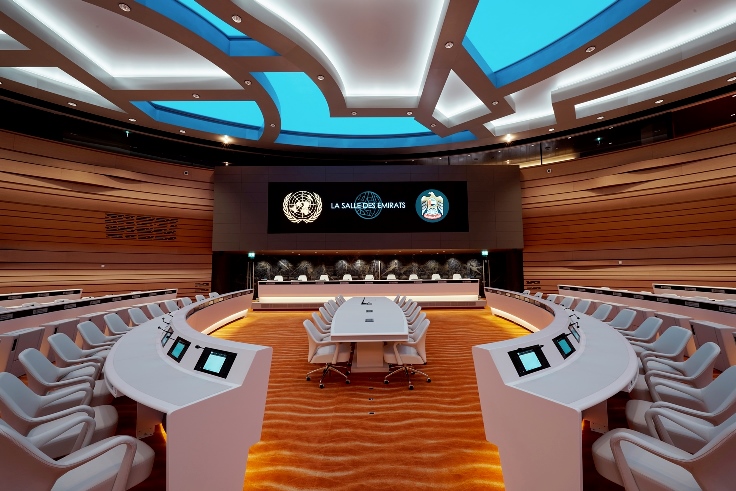 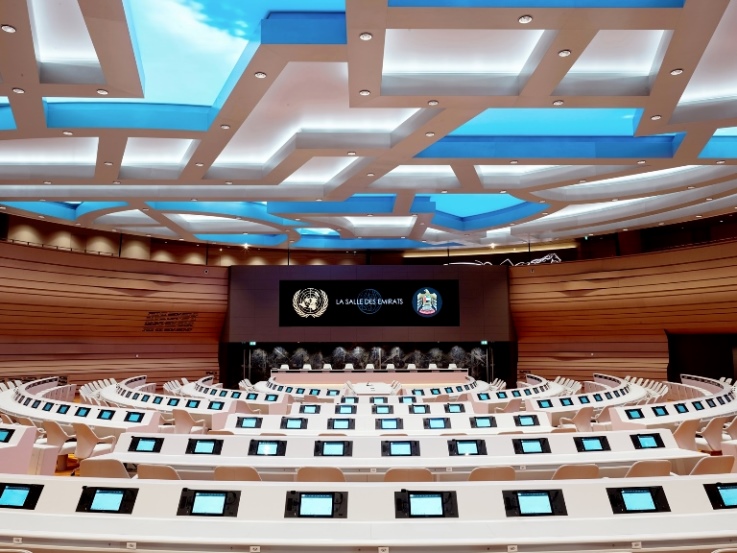 Conference Room XVII, located at the heart of the United Nations’ Geneva headquarters, was once one of the most dilapidated rooms at the office, yet after a recent $22 million transformation it now can stake a claim to being one of the most aesthetically pleasing meeting rooms in the world.

Built in the 1970s, Room XVII or ‘La Salle des Emirats’ had long been in need of a technology and architectural upgrade to allow it to facilitate the needs of country delegates that gather there on a daily basis. Room XVII is one of the four largest halls in the building, which hosts around 9,000 meetings and 28,000 participants every year. By autumn 2014 a plan to modernise the space was put in place when Michael Møller, director-general of the United Nations Office at Geneva, signed an agreement with Obaid Salem Saeed Al Zaabi, ambassador and permanent representative of the UAE to the United Nations Office at Geneva, stating that the United Arab Emirates would finance a complete renovation.

Work began on the project in December 2015 after five months of clearing the room and removing asbestos in preparation for a complete overhaul of all systems and furnishings. Projection Nouvelle had six weeks to complete the AV installation – bringing together a striking LED ceiling, a comprehensive conferencing system, an automation system and an array of audio systems. Executing the project in time for the UN to resume its busy meeting schedule presented one of the most significant challenges of the project according to Alexandre Rouvelet, the integrator’s administrative & technical director. The final outcome, however, is one that continues to impress each person who visits the room. “Today it is the most beautiful room of the UN in Geneva and more technical than ever before.”

“Room XVII not only shines in a new design, but also has technical features that will ultimately help delegates focus on finding solutions – under the blue Emirates sky – to the world’s problems that are being addressed here in Geneva,” said Møller at the room’s opening ceremony in May 2016, attended by the leadership of the UN and representatives of the UAE. 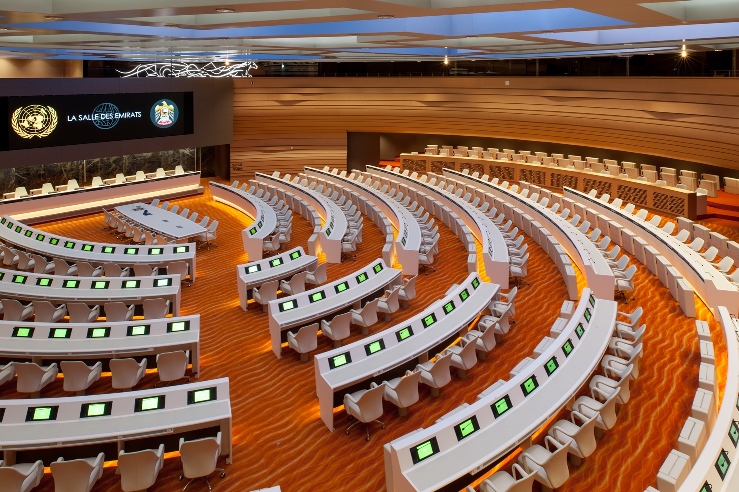 Architects Siavosh Adeli, from Lausanne, and Joakim de Rham, based in Dubai, oversaw the design of the room, working in close collaboration with integrator Projection Nouvelle and the project’s key vendors, including Leyard and Televic. “The huge challenge in renovating La Salle Des Emirates was to blend cutting edge display technology with the carefully crafted interior design reflective of centuries-old culture. The technology needed to respect the traditional culture and values of the UAE and the manner in which the country’s delegates conduct business as European United Nations representatives,” says Christian Orcin, Leyard’s VP of sales in EMEA.

For conference system provider Televic, working for the United Nations was familiar territory, yet the manufacturer says Room XVII at the Palais des Nations was its “most ambitious project” to date to provide technology for. “Mr. Adeli’s vision for the room required us to really delve into the aesthetic details of each component. Our joint goal was to shape a space where the conferencing equipment blends in with the architecture of the room in a cohesive way. That’s one of the reasons why we even developed an entirely custom finishing without any visible external screws, for example. We were committed to bringing the total vision to life,” said Bart Deschodt, Televic Conference’s general manager. 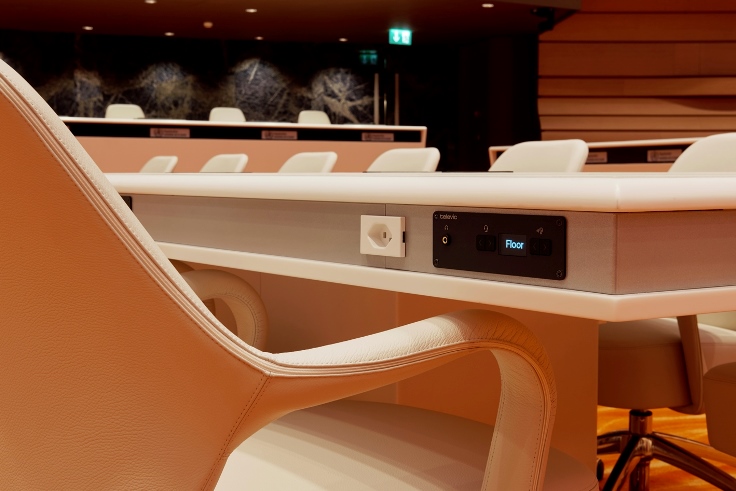 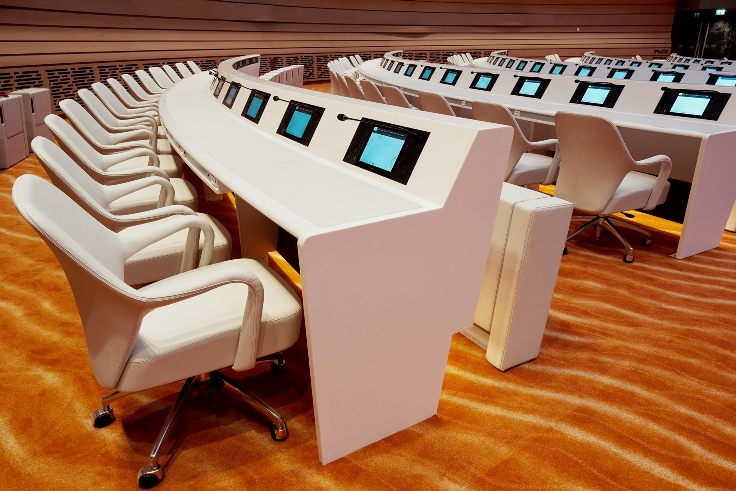 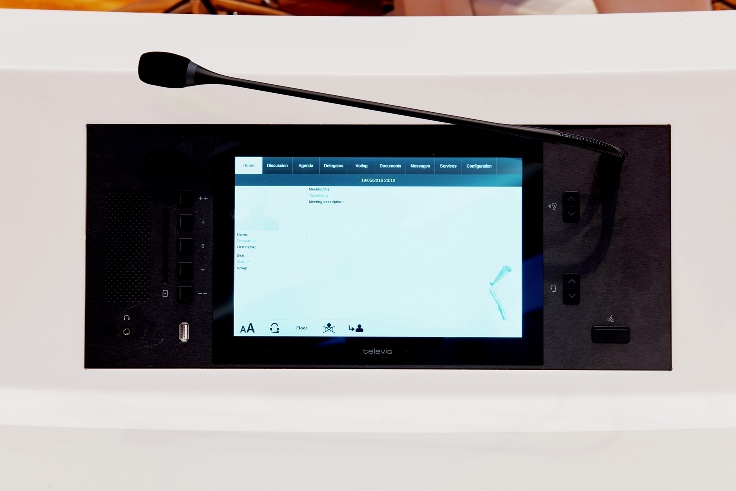 The installation features 240 uniCOS multimedia units, 249 electronic nameplates, 26 interpreter desks, and a host of other conferencing equipment. Each 10-in touchscreen multimedia unit gives the delegate the ability to consult documents, delegate messaging options, and the ability to view several video streams. The diversity of languages spoken at the UN is accommodated by Lingua Interpreter Desks, allowing interpreters to have up to six full HD lip-synced streams at their fingertips.

Although deadlines were tight, a budget of approximately $3 million (not including the LED ceiling) gave integrator Projection Nouvelle and chosen manufacturers the chance to push the boundaries of the modern meeting room with custom equipment suited to the strict aesthetic requirements of the space. A Televic conference system was selected by the integrator following a shootout stage exploring what different manufacturers could offer the intergovernmental organisation. “Working with the integrator Projection Nouvelle, it rapidly became clear that our Plixus conference architecture was a perfect match for the performance and scale required at the UN,” says Karel Vanheule, Televic Conference’s product manager. He adds: “Our flexibility, from custom development over to the ease of integration of our solutions, was a strong advantage.” 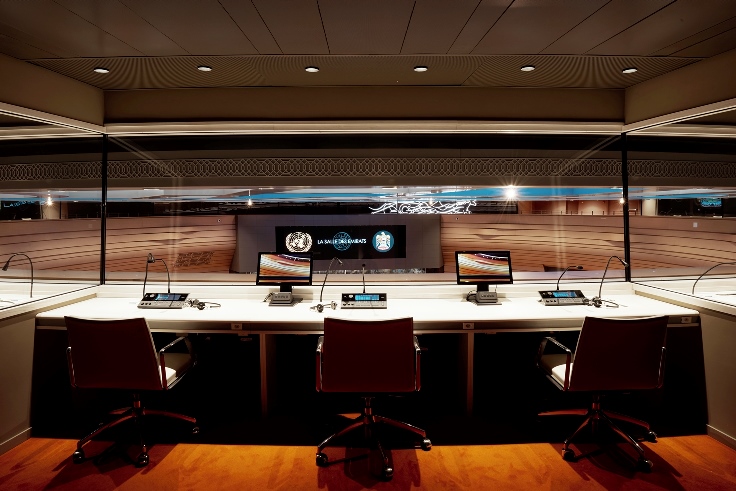 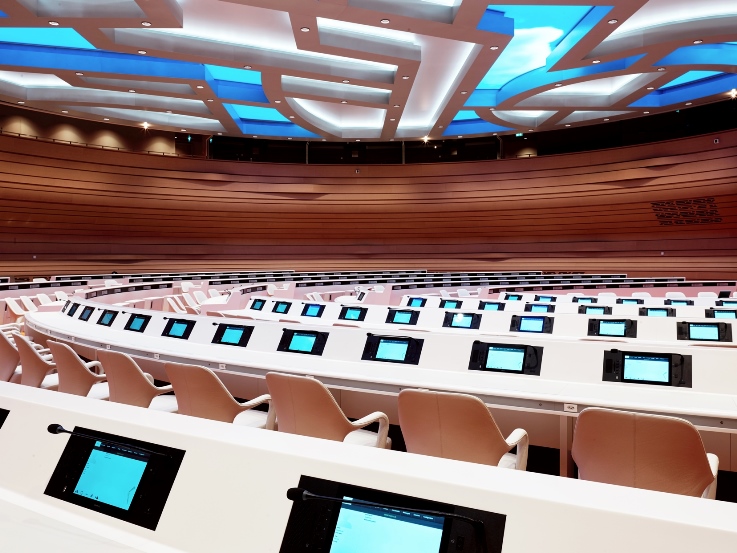 The manufacturer says Room XVII features some of the most advanced integration Televic Conference has carried out to date in its 70-year history. The manufacturer’s R & D department also dedicated significant time to collaborating with the integrator and architects to develop a new technology like the e-ink name display, allowing each delegate to have a personalised nameplate with clearly legible text that was as simple as inserting a badge. The nameplate can also even display a custom logo or other text should the UN have different requirements. Frederik Naessens, Televic Conference’s R&D manager says although a challenge, custom products like this weren’t the team’s biggest challenge – which was putting it all together. “We combined existing Plixus technology with low-latency video with multiple ways of insertion and extraction, integration with 10-in touchscreens, and the nameplates based on e-ink technology.”

Upon entering the La Salle des Emirats the most attention-grabbing aspect of the technology installed is arguably the transparent LED ceiling showing a changing sky scene measuring approximately 300m² provided by Leyard, with a 10.4mm pixel pitch and installed by another integrator, BGL. The ceiling was deployed in four quadrants as part of a metal structure housing 437 Leyard CarbonLight CLM Series mesh displays in total. Weighing 20 tonnes, and featuring a round metallic structure inscribed with the name of the United Arab Emirates in stylised Arabic calligraphy (Kufic script), the CarbonLight CLM Series display was installed to “represent the The Emirati sky transforming from dawn to dusk in real time from 9am to 8pm” in the room. The architects say it was this concept which they believe allowed them to secure the project. “The endless, limitless, interminable sky represents the futuristic and innovative vision of the country,” commented de Rham, architect on the project on the vision for the ceiling. The display presented a considerable design and engineering challenge for Leyard when it came to ensuring they installed lightweight, low consumption with low heat dissipation product according to Orcin. He adds: “We also had to be very precise when designing the holding structure and panel distribution, as we had to combine artistic curved shapes and heavy assembly.” Rouvelet notes that Leyard was the only manufacturer able to give reliable values suitable for the installation.

Leyard also provided the main display for the room, a TVH Series LED wall measuring 7.2 x 2.1m (1.6mm pixel pitch) with fibre optic transmission offering a pixel density of 360,000 per square metre for display of presentation content and feeds from PTZ cameras presented to speakers and delegates. Each cabinet has a resolution of 240×180, contrast ratio of 3,000:1, and provides 800 nits of brightness. “It was essential that the main video wall provide the highest level of operational reliability (capable of 24/7 use and with redundant video and power options) and a crisp, high contrast image,” says Orcin. 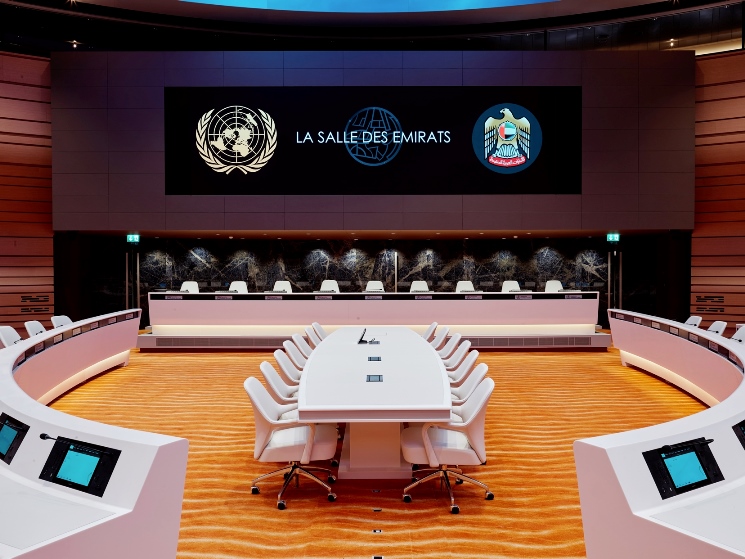 “All speakers (including line arrays and subwoofers) are hidden in the room as it was very important to integrate the technology without spoiling the aesthetics and spirit of the room,” says Rouvelet.

Other design touches, such as the golden falcon upholding the Emirates’ flag surrounded by seven stars representing the seven Emirates of the Federation, the golden-sand coloured carpet and the curved wood panels representing the wind in the dunes, compliment the room’s architecture in paying homage to the UAE.

At the heart of the project was unquestionably collaboration. The installation is both the result of a successful partnership between its architects and vendors, and a shining example of how AV Solutions technology can bring people together in a space. “The intense and close work with Mr. Adeli and the engineering team was the key to the success of this project,” notes Orcin.