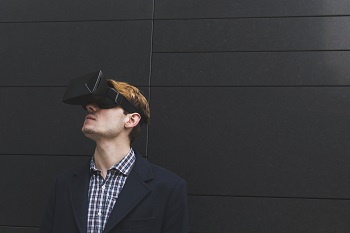 Like a video game, virtual reality (VR) technology allows participants to experience the world in simulated environments. But it may also change the game for the AV businesses. In the span of a couple years, the industry has seen tangential technologies, such as drones and the Internet of Things, become viable solutions in an integrator’s toolbox — far more quickly, for instance, than the shift from tape-based to random-access video sources, or even from analog to digital. Now, it seems, VR and it’s closely related sibling, augmented reality (AR), may be on the cusp of breaking out — and the gears are starting to turn.

Recently, pro AV distributor Stampede Global and Seattle-based VRstudios inked a North American distribution pact that will see Stampede distribute VRstudios’ virtual-reality platform and products. “We believe that virtual reality is going to have a profound impact on the [pro AV] industry,” said Stampede President and COO Kevin Kelly in a statement announcing the deal.

It already has. In education, TechCrunch reports  on the surge in companies developing VR and AR platforms for K-12 and higher-education verticals. In medicine and healthcare, VR has been finding applications in everything from pain management to socialization for the medically isolated. In retail, companies like Lowe’s and North Face have been rolling out VR solutions that place customers into virtual environments, such as a renovated bathroom in their own home or the Moab Desert.

With both consumer and the commercial markets for VR proceeding at a fast clip, it’s not surprising that annual revenue is forecast to grow from less than $1 billion today to $30 billion by 2020, according to advisory firm Digi-Capital.

Virtual reality is an extension of the trend toward immersive experiences that’s been developing in professional AV for the past several years. But instead of enveloping a group of people in, say, a video teleconference, it immerses them instead on an individual basis, pulling as many together as choose to plug into whatever virtual environment the software has cobbled together for them. Where it goes well beyond even immersive teleconferencing is that it also incorporates a user’s physical senses as part of virtual interaction. Virtual realities artificially create a sensory experience, which can include sight, touch, hearing, and smell.

VR began getting real traction in this century as more gaming systems added 3D and haptic feedback capability, and 360-degree viewing became more common through platforms such as Google Earth. The proliferation of consumer VR headsets stimulated the Moore’s Law effect, taking VR out of the expensive realm of applications like military flight simulators and high-end amusement park rides and into a commodity environment.

Augmented reality, on the other hand, describes a live-direct or indirect view of a physical, real-world environment whose elements are supplemented by computer-generated sensory input, such as sound, video, graphics or GPS data. It essentially annotates reality, adding commentary or additional information, enhancing one’s current perception of reality rather than replacing the real world with a simulated one.

Less immersive and more supportive, AR hardware can be less imposing than the bulky headpieces of VR. They’re typified by Google’s Glass product, released widely in 2013, which essentially integrated a smartphone’s worth of processing, including a camera and a heads-up display, into a pair of eyeglass frames. (Google Glass received mixed reviews on its release, generating concerns about privacy and safety. The most recent AR star, the Pokémon Go video game released earlier this year, has revived some of those concerns.)

But despite some mixed press, AR shows considerable potential for business applications. A Gartner analysis suggests that as location services and image-recognition capabilities improve, businesses can use AR for tasks such as a vehicle, campus and in-building navigation and identification, and personnel and object-recognition in security and decision-making applications.

To some integrators, VR and AR are more immersive and personalized extensions of simulations they’ve done in the past for training, education and other applications. What entering the VR and AR domains has meant is more intensive partnering with content developers.

“The goal is to bundle the entire experience for the client, so we’re working closely with content developers so that we can bring a complete solution, with hardware and software,” explains Dale Bottcher, Senior Vice President of sales at integrator AVI-SPL. Botcher was speaking from Microsoft’s Worldwide Partner Conference, held in Toronto in July, where he and other integrators looked at hardware such as Microsoft’s HoloLens. That and other VR and AR products from companies like Barco and Zeiss are providing a professional AV product pool for integrators.

On the content side, AVI-SPL’s Senior Vice President of Marketing Kelly Bousman says that big data will inevitably play a part in how VR develops for AV applications. Referring to sports, an area that’s already leveraging VR, she points out that virtual scenarios will require massive amounts of information from which to create viable outcomes for users.

“The data is what will power the simulation that the batter sees of the virtual pitcher he’s facing, to see what he’ll face in reality,” she explains. As good as VR’s AV experience might be, its actual value will depend on how accurate and well-processed the information that creates the simulation is. “It’s like a version of Moneyball,” she says referring to the book and film of that name that used data-based sabermetrics to rebuild the financially challenged Oakland A’s in the 1990s.

Kurt Hoffmeister, Vice President of Engineering and Product Development at integrator Mechdyne, says that while VR and AR have been around for a while and have been the basis for much of the company’s 20 years in business, it’s the recent explosion of consumer activity — particularly the proliferation of VR headset products — that is spurring VR’s growth in the AV sector. However, he adds, VR in an AV environment is more than just the headset.

“In the past, VR mostly used immersive flat-panel displays and projection,” Hoffmeister says. “Now, people want the headset in the mix, but that can complicate collaboration in applications like education and training. So very often, displays also still need to be part of the design, so that others can see ‘over the shoulder.’ It still requires considerable AV integration.”

Headset-based VR is, at its heart, very much a game-based proposition. Viewed that way, Hoffmeister says multiplayer game design can be applied to VR for pro AV applications, but it will require coding and IT skills that integrators may have to develop in order to be able to fully leverage VR in their businesses. “If your ‘game’ is a new assembly process on a factory floor, then a multiplayer game approach can work well,” he says. “But for other applications, the software will have to be adapted. That requires certain skills.”

Broadcast and live events are becoming fertile fields for VR and AR technology. This year, live VR company NextVR concluded a five-year deal with Fox Sports to produce live and video-on-demand VR content around sports broadcasts and inked a four-year deal with Live Nation, the world’s largest concert promoter, to manage VR for dozens of concerts annually. The company has assembled three mobile VR units that can be dispatched to live-event sites: a truck-based mobile unit that can field up to 10 VR camera rigs that will primarily work events in North America and two flypack units that will have the capability of supporting VR events globally.

Interest on the academic side is also increasing. The 2016 AES Convention, the annual conclave that takes place in the U.S. and is the largest of the organization’s conventions globally, is putting VR and AR high on its agenda for the first time. The AES International Conference on Audio for Virtual and Augmented Reality will co-locate with the 141st AES Convention Sept. 30 to Oct. 1 in Los Angeles. It will include a manufacturer’s expo, essentially creating a mini trade show for the burgeoning sector.

Virtual and augmented reality are now in many AV integrators’ toolboxes. They’ll be in many more in short order. So let the “games” begin.
For more information on this and other AV technologies, please call our technology consultants on 1300 369 451.