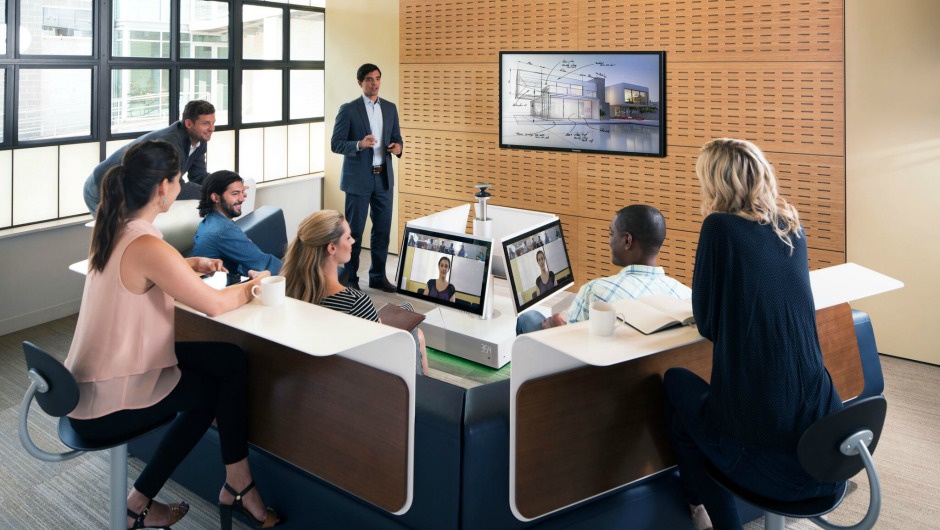 At the recent Imagine 2016 event in Auckland, there were many topics discussed, not least of which the power of collaboration and where we’re going in the future.

James Ware, Polycom ANZ senior manager of Alliances and Cloud Services, spoke about the workspace of the future.

“There is no longer a standard meeting room,” says Ware. “It’s all about open plan and opening the office up to collaboration – we’re seeing a real focus on the huddle room.”

A ‘huddle room’ is essentially a smaller, more connected version of the boardroom. Typically, they include a screen, a phone system and a central surface with around four seats or less and businesses use them for quick and insulated private calls.

“While there might be a large number of boardrooms, it’s a relatively small number when compared to huddle rooms,” says Ware. “We estimate about 1% of the world’s huddle rooms are in Australia and New Zealand, which equates to around 450,000.”

Traditional office space is shifting toward a more open, more shared and more affordable combination of public and private collaboration spaces around the world. It has never been more important to enable people to create their own workspaces via secure connections from anywhere, on any device.

There is no doubt that across Australia and New Zealand, there is a large increase in the use of global teams and in tasks that require cross organisational collaboration. This is where regular video conference calls become crucial. However, while traditional phone calls and conference systems do a great job of transmitting the audio you want to be picked up, they also do a great job of picking up unintentional noise.

“Think about the guy in the back noisily eating the packet of chips, the people working from home with enthusiastic children and barking dogs or even just the general day-to-day noise of an office,” Ware says. “It can put a strain on any meeting – and even bring them to a halt.”

It’s clear that modern organisations need to find a way of making the dramas of distance disappear – fortunately, Polycom has the answer with their latest line of products.

“Our NoiseBlock technology automatically blocks background noise from any meeting, meaning the guy in the background can continue happily eating his chips – no one else in the meeting will hear a thing,” Ware says. “Furthermore, we also offer the ability to utilise an ‘Acoustic Fence’, whereby you can hold the meeting from noisy locations such as your car, a coffee shop or on the train and all noise around you within the fence will be blocked.”

Wainhouse Research and Polycom conducted surveys from Polycom’s existing customers regarding their thoughts on the video-enabled workspace – here are some of the results:

“What we want to do is unleash the power of collaboration for organisations, and it’s all centred around three key features – workspace, experience and workflow,” says Ware. “We want to enable people to create their own workspaces via secure connections from anywhere, on any device.”

According to a survey from Polycom, more than 48% of ANZ employees would use video conferencing more frequently if it was as simple as using a personal device – and that is what Polycom has achieved, with a simple user interface that links seamlessly with various platforms and where you literally have to just click to join.

If you would like more information on future ways of working, please contact our sales team on 1300 369 451 or via email at sales@insightsystems.com.au. Our experienced Audio Visual Consultants will be more than happy to help you.